Get Outdoors this Summer in Seattle 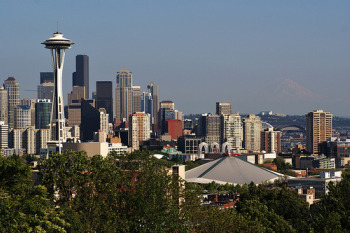 Seattle locals tend to get a little defense about the perception that it rains all the time in Seattle. They’ll argue that in winter, yes it does seem to always be raining, but hey, it’s a light rain and it still beats negative temperatures and foot-high snowdrifts. And they’ll point out that summer in Seattle is one of the most glorious experiences a person can have. You see, in summer, the city dazzles. The rain stops, the clouds part, and the sun shines down on the Emerald City, flanked by Mt. Rainier to the south, the Olympic Mountains to the west and surrounded by water.

Seattle offers plenty to see and do in the off-season, but if you’re coming to experience the beautiful nature that surrounds the city or to enjoy all of the outdoor adventures offered, it’s best to come during the summer, when days are long, warm, and yes – sunny. From the views from the iconic Space Needle to the breeze off Puget Sound on the waterfront, everything is better in summer in Seattle.

Seattle is one of the best cities in the US to visit if you want to explore some of the national parks. The city is actually close to three major national parks – North Cascades National Park, Olympic National Park and Mt. Rainier National Park – so you can hike, camp, fish, kayak, and explore in every direction.

Summer is high season in Seattle, which means you’ll pay a bit more for the spectacular weather, but you can still find affordable airfare to Seattle if you book in advance or keep your eye out for last-minute deals.

Cheap Seattle hotels are easier to come by in shoulder season. Locals say summer doesn’t really start in Seattle until the 4th of July – if you come earlier, you may experience a few rainy days, but you’ll pay a little less too. The fair weather seems to stretch on into September, so look for late summer deals as well.