Planning a Trip to the Sasquatch Festival 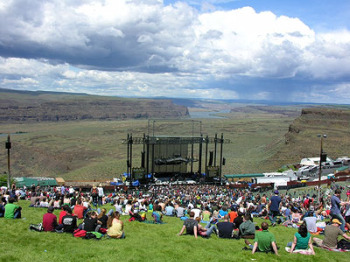 After spending two years living in Seattle, I came up with a theory about how residents of the city seem to suffer from a sort of seasonal amnesia.

During the wet, gray days of winter, it’s easy to forget that the perception that it rains all the time in Seattle isn’t really true. And during the long, glorious days of summer, those cold drizzly days seem like a hazy dream.

As spring begins to bloom in Seattle, those memories are already fading, being replaced with thoughts of all the wonderful events and activities that take place in and around the city during warmer months.

One of those such events in the Sasquatch Festival, held every year in the Columbia Gorge in May. The festival is scheduled for May 29-31 this year and will feature an outstanding lineup of some of the best musical acts – like Vampire Weekend, OK Go, Massive Attack, and She & Him – performing against the beautiful backdrop of the Columbia Gorge.

If you’re headed to the festival this year, check out our Sasquatch Festival travel deals and look for cheap flights to Seattle, the closest airport. Combine your trip to the festival with a few days in the Emerald City as well. There are plenty of inexpensive hotels in Seattle, and tons to do in the city – including sampling the farm fresh fare at Pike Place Market, taking in the view from the Space Needle, and exploring Bainbridge Island, a short ferry ride away.