Seattle Among the Most Wheelchair-Friendly Cities to Visit 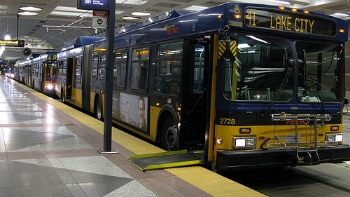 Given the fact that the Americans with Disabilities Act has been around since 1990, it’s not surprising to most people to see wheelchair-friendly adjustments to things like sidewalks and public bathrooms in cities across the country. But some destinations do tend to seem like they’d be more accessible to wheelchair-bound travelers than other places.

Frankly, when Seattle turned up on this list of the nine most wheelchair-friendly cities I was a bit surprised. It’s a progressive city, no doubt about that – but have you seen the hills in Seattle lately? The article’s author points out, however, that the light rail connecting Seattle’s airport to downtown is completely wheelchair-friendly and transportation throughout the city center is wheelchair-friendly, too.

While finding an accessible hotel room can be challenging in some places, the author of this article makes note of a particular Homewood Suites in Queen Anne that’s got big wheelchair-friendly suites as well as a few other hotel options in Seattle.

The main tourist sights in Seattle aren’t off limits to those in wheelchairs, either, as the Space Needle and even Safeco and Qwest Fields are accessible. And if it’s more of a watery trip you had in mind, the ferries from downtown Seattle to the nearby islands are also wheelchair-friendly.

Seattle’s airport is eclipsed by other west coast airports like San Francisco and L.A. in terms of size and traffic, but you can still often find cheap airline tickets to Sea-Tac Airport (especially in the off-season). What’s more, flights to Seattle are often cheaper than flights to Vancouver from most points in the U.S. – so if you’d like to combine your Seattle adventure with a trip north of the border, you can do it with a short drive after you’ve got your fill of Seattle.