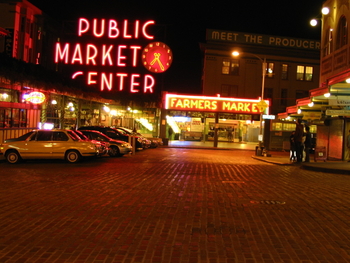 As someone who has visited pretty much every major city in the United States, I can honestly tell people that the majority of them aren’t special enough to be worth visiting. But of course, Seattle isn’t on that list. There’s something about the culture up here that really stands out and feels special, almost like a variation on the “energy” that everyone feels when they visit New York City for the first time.

The city has an incredibly pleasant downtown area, which isn’t true of most major US cities. You’ve got interesting bars and restaurants throughout the city center, and there are plenty of affordable ones mixed in with the expensive ones. Even the area near the train station, which might feel a bit dangerous at first, is also filled with hip bars and unusual eateries. The area around Pike Place Market, which is only a short walk away, is also an interesting mix of old school and trendy, so it’s one of the best areas to stay in if you can pull it off.

Getting here can be cheap

Unless you are coming from Alaska or Seoul, Korea, you might notice that Seattle isn’t exactly a major transportation hub, but still, airfare to Seattle tends to be surprisingly cheap. Alaska Air and Horizon dominate the short distance flights from the western half of the United States, but all the major airlines come here so you’ll normally only have one stop at the most along the way.

Hotels are affordable, but there is an amazing hostel to consider

One of my favorite Seattle travel tips involves one of my favorite hostels in the world. The Green Tortoise Hostel sits literally just across from that huge and famous sign for the Pike Place Market, so the location could not be any better. The place is large and friendly, and the free breakfast each morning is filling and served in a room that overlooks that sign. It’s like a million dollar view in a place where a bed costs around $25 per night.

They have private rooms for a bit more, so if you are coming with a small group you can also take advantage of the low prices at the place. But if that isn’t your speed you’ll be happy to know that Seattle hotel rooms tend to be fairly cheap by big-city standards. There are boutique hotels mixed with more modest places and even a few large chains that cater to high end and business travelers.

Don’t book a place several miles outside the city center as a way to save a bit of money if you can help it. Most of the city center, including Capital Hill and the Space Needle area are walking distance if you stay near the center, but if you stay near the airport or in one of the suburbs you’ll be dealing with parking headaches and traffic problems. It’s better to stay at a less-nice place in the center than a nicer place in the suburbs in Seattle, though the most important thing is just to come anyway.