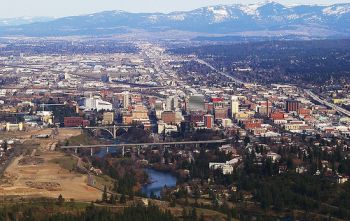 The sports news might be singularly focused on the Olympic Games right now, but before we know it the Olympics will be history (I always forget how short the timespan is!) and it’ll be time to move on to the next big event on the sports calendar – March Madness.

Basketball isn’t my favorite sport, but I do enjoy watching it – and I do think that college basketball and specifically the NCAA Championships are often the most exciting basketball games of the entire year. Pro teams rise to dominance and tend to stay there because their players stay on year after year, but with college it’s different. Yes, certain schools tend to dominate because they attract higher-caliber players, but there are always Cinderella teams ready and waiting to pounce if one of those big schools should slip up. And those slips aren’t infrequent, either.

But while watching the NCAA tournament on TV is fun, being there at the games themselves is even better.

This year, one of the venues for the first and second rounds of the tourney is Spokane in Eastern Washington. Basketball aficionados will remember this city is home to Gonzaga University, which, for at least a few years, provided some of that underdog entertainment I mentioned earlier. It’s not really possible for Gonzaga to be a true Cinderella team anymore, since they’ve established themsleves as a team to watch, but they’re still not quite one of the big dominant schools… Yet…

At any rate, if you’re thinking of heading out to Spokane to see the games, then here’s what you’ll need to know.

Spokane has an airport, but unless you’re already in the Pacific Northwest or a nearby state you might have trouble finding a good deal on a direct flight. You might want to check for cheap flights to Seattle and then get on a short hopper flight from there to Spokane. At just about any other time of year, you’d be able to find lots of cheap hotels in Spokane – but with a big event like March Madness rolling into town you can bet rooms are going to book up quickly. I’d recommend booking a room as soon as you know for sure you’re going.

As we close in on the month that’s given its name to this basketball tournament, the number of March Madness deals is just going to go up. So if you don’t have plans yet but think you might want to go, or if you’re waiting until you find out whether your team will be playing in Spokane or one of the other cities, don’t worry quite yet. Keep an eye on air ticket prices to make sure you don’t miss the window right before fares skyrocket.