Will you need a bumbershoot at Bumbershoot this year? 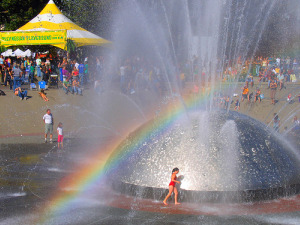 Let’s face it – Seattle isn’t exactly known for its weather. Or rather, it’s known for having the kind of weather that wouldn’t exactly be conducive to outdoor music festivals (even if they’re technically in the summer). Summers in the Pacfic Northwest can be downright glorious, but they can also be unreliable weather-wise. The thing is, if you’re prepared for a drizzle when you’re in Seattle, then it’s no big deal – and what’s more, then you’re pleasantly surprised when it doesn’t rain.

Which brings me to Seattle’s long-running end-of-summer party, Bumbershoot. It’s a three-day music and arts festival that takes place over Labor Day weekend and is a fantastic way to say adios to summer.

First off, the word “bumbershoot” means umbrella, which (I think you’ll agree) is appropriate, given the aforementioned rain issue in Seattle. What’s more, there have been Bumbershoot festivals of years past that have experienced more than their fair share of the wet stuff. But no matter, Seattle-ites always soldier on and have a good time anyway. When you come visit, you’ll likely get into the “liquid sunshine” spirit, too.

Bumbershoot used to be more of a showcase for local musicians, but in more recent years it’s become a stop on many big-name artists’ summer tours. There’s still a healthy dose of Seattle and Pacific Northwest talent in the lineup, so if you’re particularly interested in up-and-coming bands then this is a great festival to check out. Bumbershoot isn’t just about music, however, as there are also segments of the festival dedicated to independent film, dancing, poetry slams, and street performances.

This year, Bumbershoot runs from September 4-6, so there’s still time to score some Bumbershoot travel deals and make your way to Seattle for the festival. Flights to Seattle in late August/early September aren’t usually too expensive (depending on where you’re coming from, of course) because the high season is winding down, and you’ve got your choice of hotels in Seattle for the festival, because it takes place just north of downtown.