Going to Coachella Festival from Seattle 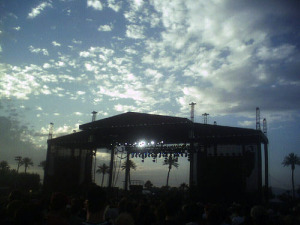 Seattle has a history of being a haven for music lovers, whether you’re talking about the grunge movement or not. So if you’re one of the Seattle folk who’ll be heading to the Coachella Music Festival this year, you’ll be in good company.

Coachella runs from April 16-18 this year, and musical performances by the likes of Jay-Z, Muse, Gorillaz, Vampire Weekend, Public Image Limited, Grace Jones, Echo & the Bunnymen, Faith No More, Devo, Pavement, Phoenix, Orbital, Spoon, Sly & the Family Stone, and De La Soul. In addition to that, the festival grounds are decorated with enormous sculptural pieces of art, making the whole scene more than a little other-worldly. It’s a music festival with an excellent reputation, and well worth the effort it takes to get to its desert location in southern California.

The closest airport to the festival grounds is in Palm Springs, so that’s going to be your best option as far as getting to Coachella from Seattle with relative ease. You should be able to find good deals on flights, considering you’re not coming from the other side of the country, but if you’re not finding as many choices as you’d like schedule-wise you can look at flying into another airport in the area – one that’s a larger hub. Finding cheap flights to San Diego or Los Angeles shouldn’t be a problem at all.

As for accommodation, most people camp overnight on the festival grounds – it’s relatively inexpensive, and you certainly get to experience more of the festival atmosphere that way. But if you’re really not interested in spending the night with several thousand of your (new) closest friends, you can escape to a hotel in the nearest town of Indio – or, for more selection (and probably better rates), look at the cheap hotels in Palm Springs.

And after a long and fun-filled weekend at Coachella, make re-entry at Sea-Tac as easy on yourself as possible. By booking your airport parking in Seattle before your trip, you’ll save time and money on both ends of the flight. No long wait at the terminal for the bus to the economy lot when all you want to do is get home and fall into bed. (And maybe do some laundry.)

Have fun at Coachella!