Visit Australia in Their Winter (Our Summer) 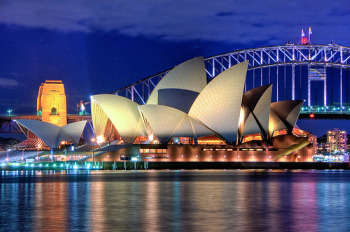 Although the sun poked its nose out of hiding in the Pacific Northwest today for the first time in what feels like years, we’re still missing out on that phenomenon most people call SUMMER at this time of year. Yes, it may officially be summer if you look at a calendar and pay attention to the Solstice, but a glance out the window will have you thinking it might very well be February.

Which got me thinking. If the weather at home is kind of crappy right now, and so many people are complaining that it’s too bloody hot where they are (I’m lookin’ at you, New York and D.C.), then why not go somewhere where it’s actually supposed to be chilly right now? Why not embrace the weather and go where it’s seasonably cool? As an added bonus, why not take advantage of the fact that in those places it can be a little cheaper to visit right now as opposed to waiting for their summer?

This, my friends, may be the perfect time to travel to Australia.

Getting to Australia from Seattle isn’t typically a cheap affair, as it is on the other side of the world, but now is a pretty good time to find cheap flights to Australia since it’s not their high season. Yes, there’s still plenty to do in Australia during their winter, and if you stick to the coastal cities – and especially the northeastern part of the country – you may not even realize it’s winter. Until, that is, you look at prices. There are places that would qualify as cheap hotels in Sydney year-round, but during Australia’s winter the places in that category are more numerous and sometimes markedly nicer.

So if the lack of summer sun in Seattle has you down, maybe it’s time to skip town and go somewhere where it’s meant to be cold right now. After all, you’ve got to maintain that pasty white Seattle “tan,” right?